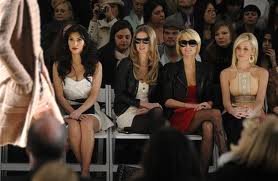 Who makes the front row at Fashion Week. The politics of who sits where in a fashion show front row is one of the best, fascinating and most amusing parts of fashion week. A fashion publicist became notorious for saying that if you aren’t seated in the first three rows at a show during Fashion Week, you might as well stay home. Well, if the first three rows are where the power players sit, then it goes without saying that the crème de la crème of the fashion world sits in the front row, and the front row only.

And as the Fashion Week kicks into gear around the major capitals, it’s celebrities, all-important buyers and retailers, editors, stylists and a whole lot of self-anointed fashion bloggers who make the A-row cut. The posturing and posing that goes on to secure a coveted front row seat at each and every one of the 47 shows can be hilarious.

Obviously, sitting in the front row is important to fashion show attendees, but it’s also extremely important to designers. With an average of 125 assigned front row seats at a typical fashion show, many designers are judged just as harshly by who sits in those seats than by the clothes that come down the runway.