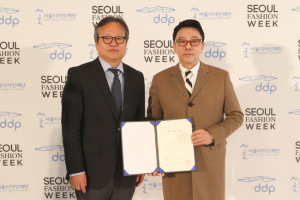 “I will try my best to make SFW Asia’s representative fashion week that leads the fashion trends of Asia. If anyone wants to know about Asian fashion, they will have to come to the SFW,” Jung told The Korea Herald before the appointment ceremony in Seoul on Wednesday.  Jung is the first director of SFW in its 15 years of history. It has been largely run by separate associations of designers with financial and logistics support from the Seoul Metropolitan Government.

The SFW has been criticized for failing to bridge designers, foreign buyers and press effectively, which was considered as a major factor that has left Korea’s largest fashion showcase to remain a local event enjoyed by local designers and audiences.

With less six months left before the spring and summer collections for 2016, Jung plans to facilitate networks among buyers, designers and press at the coming SFW in October.