In Australia, Islam is the largest religion after Christianity. In order to promote fashionable clothing to Muslim women, an exhibition started recently. The show is also held to feature the various works of Muslims fashion designers.

Many of the labels on show are designed by female Muslim designers. They were not able to find modern and presentable scarves and accessories. So they started to design for themselves.

The exhibition is called: Faith, fashion, fashion: Muslim Women’s Style in Australia. You can read an article in the OnIslam.net here, onislam.net/english/news/asia-pacific/464653-australia-hosts-muslims-fashion-exhibition. – Australia Hosts Muslims Fashion Exhibition (Link removed, no longer online). The exhibition starts on October 10, 2013 in Sydney. 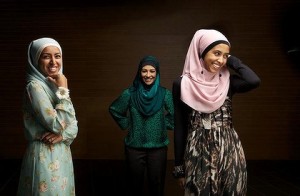 Muslims have been in Australia for more than 200 years. They make up 1.7 percent of its 20-million population. Islam sees hijab as an obligatory code of dress. Not a religious symbol displaying one’s affiliations.

Modest Islam fashion is one of the fashion industry’s largest potential growth areas say a representative of the clothing exhibition.